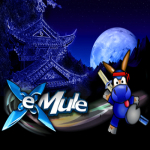 Since eMule is open source (GPL) it is possble to make enhancments to the original program and add new features to it. The programs that have undergone such modifications are called emule mods (modifications). The morph mod contains all the features form official and some more. You do not need to run/install official eMule to use morph. Everything is in one big package. This is not a plugin, it is a complete replacement.
It includes many extra features over the official client and also has a lot of tweaks under the hood to be better responsive. There are features for easier use (like upnp and tooltipped preferences), releasing (powershare, hideos) and much more.