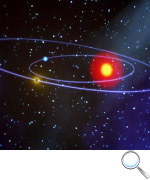 Most of the presently identified exoplanets have masses similar to that of Jupiter and therefore are assumed to be gaseous objects. With the ever-increasing interest in discovering lower-mass planets, several of the so-called super-Earths, which are predicted to be rocky, have already been found. Now a possible discovery of a planet around the M-type star GJ 436 with a minimum mass of 4.7+/-0.6 M_earth and a true mass of ~5 M_earth has been reported.