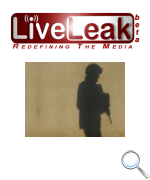 Liveleak, based in the UK, is a website that lets users post and share videos, similar to sites like YouTube. Liveleak places emphasis on current events, politics and reality-based footage such as war scenes from various parts of the world. The site first came to prominence in 2007 following the execution of Saddam Hussein gaining mention from the likes of Whitehouse spokesman Tony Snow and British Prime Minister Tony Blair. LiveLeak claims to follow a strictly non biased approach to members and media believing in freedom of speech within their rules regardless of how certain content might offend them personally.