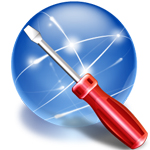 Windows XP SP2 introduces a new “feature” to TCP/IP in order to babysit users even more and to “reduce the threat” of worms spreading fast without control. In one such attempt, the developers have limited the number of possible TCP connection attempts per second to 10 (from unlimited in SP1). This argumentative feature affects server and P2P program performance severely that open many outbound connections at the same time (at least when you have a fast connection).

Unfortunately there exists no REG-key which could easily be set to deactivate this “feature”. Adjustments to the system file TCPIP.SYS have to be made. To do this I recommend the “Event ID 4226 Patcher” which can be found on the homepage linked below.