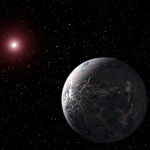 The first milestone in the discovery of extrasolar planets was in 1992, when Wolszczan and Frail published results in the journal Nature indicating that pulsar planets existed around PSR B1257+12. Wolszczan had discovered the millisecond pulsar in question in 1990 at the Arecibo radio observatory. These were the first exoplanets ever verified, and they are still considered highly unusual in that they orbit a pulsar.

The first verified discovery of an exoplanet (51 Pegasi b) orbiting a main sequence star (51 Pegasi) was announced by Michel Mayor and Didier Queloz in Nature on October 6, 1995. Astronomers were initially surprised by this “hot Jupiter” but soon set out to find other similar planets with great success.

An up-to-date list of all extrasolar planets can be found at in the Extrasolar Planets Encyclopaedia which was established in February 1995.