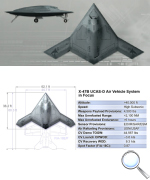 The U.S. Navy is calling for competitive prototyping in preparation for fielding its first squadron of Unmanned Combat Air Systems (UCAS) by 2025.NUCAS is expected to replace the Navy’s F/A-18s on aircraft carrier decks, and the system will provide greater range and time on station than the manned fleet. This shift will project Navy air power far beyond today’s reach, adding more protection to ships at sea.This strategy puts the Navy at the forefront of the Pentagon’s efforts to field combat drones; the U.S. Air Force has decided to create a manned design for its next-generation bomber for fielding in 2018.

Comment
I would love to see those combat drones in action… at least if they would be used purely to fight other drones. But I fear that is not what the U.S. Navy has on its mind.