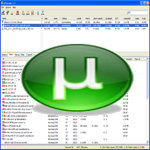 uTorrent implements many of the features introduced by much larger clients, but uTorrent retains a very small memory footprint. uTorrent’s typical memory usage is less than 6 MB, and the CPU use is low enough for most older systems (as low as 486) to run it. uTorrent is one of the most popular BiTorrent clients for PC users.